Memories are what you no longer want to remember. JOAN DIDION

I was almost twelve years old when I decided to kill my parents.

I had made up my mind. I’d go to bed and wait until they fell asleep. That was always easy to tell because Papa would lock the big, heavy double windows and close the thick greenish-bronze curtains. He’d repeat the same things he said every night after supper, which in those days had become little more than a steaming bowl of tasteless soup.

“There’s nothing to be done. It’s all over. We have to leave.”

Then mama would start shouting, her voice cracking as she blamed him. She’d pace the whole apartment—her fortress at the heart of a sinking city; the only space she’d known for more than four months—until she wore herself out. Then she’d embrace Papa, and her feeble moans would finally cease.

I’d wait a couple of hours. They wouldn’t put up any resistance. I …

Today’s book is The German Girl by Armando Lucas Correa. 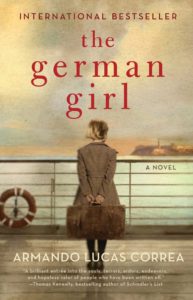 A stunningly ambitious and beautiful debut novel, perfect for fans of Sarah’s Key and All the Light We Cannot See, the story of a twelve-year-old girl’s harrowing experience fleeing Nazi-occupied Germany with her family and best friend, only to discover that the overseas asylum they had been promised is an illusion.

Before everything changed, Hannah Rosenthal lived a charmed life. But now, in 1939, the streets of Berlin are draped with red, white, and black flags; her family’s fine possessions are hauled away; and they are no longer welcome in the places that once felt like home. Hannah and her best friend, Leo Martin, make a pact: come what may, they promise to have a future together.

A glimmer of hope appears in the form of the St. Louis, a transatlantic liner that can provide Jews safe passage to Cuba. After a frantic search to obtain visas, the Rosenthals and the Martins depart on the luxurious ship bound for Havana. Life on board the St. Louis is like a surreal holiday for these refugees, with masquerade balls, exquisite meals, and polite, respectful service. But soon ominous rumors from Cuba overshadow the celebratory atmosphere, and the ship that once was their salvation seems likely to become their death sentence. Hannah and Leo must make an impossible choice or risk losing everything that matters.

Seven decades later in New York City, on her twelfth birthday, Anna Rosen receives a package from Hannah, a great-aunt she has never met but who raised her deceased father. In an attempt to piece together her father’s mysterious past, Anna and her mother travel to Havana to meet this elderly relative. Hannah tells them of her astonishing journey on the St. Louis and, for the first time, reveals how she and Leo honored the solemn pact they had made. By connecting the pain of the past to the mysteries of the present, Hannah gives her young great-niece a sense of their shared histories, forever intertwining their lives, honoring those they loved and cruelly lost.

Yes. This book was a selection for the book club to which I belong, and if it weren’t for that, I wouldn’t have picked it up, but once I did, I got right into it and read it quickly. The speed at which I read a book indicates how much I’m enjoying it, and this one was one I read in less than a week.

Don’t get me wrong—it wasn’t the type of page-turner I typically think of as a page turner: thrilling, suspenseful, exciting—this was historical fiction and disturbing. Typically, I read those at a slower pace, because I know nothing good will result for the characters. I expect it to evoke feelings of frustration, rage, grief—all kinds of negative emotions. True enough, in this case, since the story was about a German Jewish family escaping Nazi Germany on the St. Louis, the ship that was refused entry to its passengers in numerous countries. The original destination was Cuba, and a few managed to gain entry there, but many were turned away. To the shame of Canada and the U.S., they were refused entry to those countries.

Even though the passengers had paid exorbitant fees to get on the ship—paying for a return trip when they expected a one-way voyage—they were refused entry everywhere they went. Facing certain death in the concentration camps, they returned to Europe. Belgium, the Netherlands, the U.K., and France accepted some of the refugees. Many of the refugees ended up in the death camps and died there.

This isn’t a light read, but it’s a timely one and important for anyone who wants to learn from the past to avoid repeating it.

It’s well-written and engaging, even though it’s also heartbreaking. I’ve heard it said that reading fiction teaches empathy. This book validates that.

Does this passage from The German Girl intrigue you? Does it make you want to turn the page and continue reading? Will you run out now and buy the book? Borrow it?

Ugh, no. The first sentence turned me off with the “was” statement, thinking it could have been more active. Then the next sentence started with “I” just like the first one and I knew the repetition would continue through the work like that. So the answer is a big resounding “No”.