There is no remedy for love but to love more.

Once upon a time, before the whole world changed, it was possible to run away from home, disguise who you were, and fit into polite society. The children’s mother had done exactly that. Susanna was one of the Boston Owenses, a family so old that the General Society of Mayflower Descendants and the Daughters of the American Revolution were unable to deny them admission to their exclusive organizations, despite the fact that they would have liked to close the door to them, locking it twice. Their original ancestor, Maria Owens, who had arrived in America in 1680, remained a mystery, even to her own family. No one knew who had fathered her child or could fathom how she came to build such a fine house when she was a woman alone with no apparent means of support. The lineage of those who followed Maria was equally dubious. Husbands disappeared without a trace. Daughters begat daughters. Children ran off and were never seen again.

In every generation there were those who fled Massachusetts, and Susanna Owens had done so. She had escaped to Paris as a young woman, then had married and settled in New York, denying her children any knowledge of their heritage for their own good, which left them with nagging suspicions about who …

Today’s book is The Rules of Magic by Alice Hoffman. 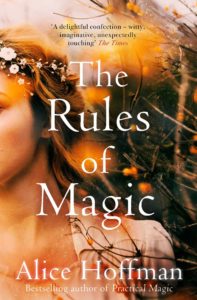 Practical Magic, to date Alice Hoffman’s biggest ever selling novel, became a major Hollywood film starring Sandra Bullock and Nicole Kidman who played sisters Sally and Gillian Owens. In this sparkling prequel we meet sisters Frances and Jet and Vincent, their brother. From the beginning their mother Susanna knew they were unique: Franny with her skin as pale as milk and blood red hair, who could commune with birds; Jet as shy as she is beautiful, who knows what others are thinking, and Vincent so charismatic that he was built for trouble. Susanna needed to set some rules of magic: no walking in the moonlight, no red shoes, no wearing black, no cats, no crows, no candles and certainly, absolutely, no books about magic… But the Owens siblings are desperate to uncover who they really are. Each heads down a life-altering course, filled with secrets and truths, devastation and joy, and magic and love. Despite the warning handed down through the family for centuries – Know that for our family, love is a curse – they will all strive to break the rules and find true love. “Hoffman delights in this prequel to Practical Magic… a coming-of-age tale replete with magic and historical references to the early witch trials. The spellbinding story, focusing on the strength of family bonds through joy and sorrow, will appeal to a broad range of readers. Fans… will be bewitched,” Publishers Weekly (starred review) on The Rules of Magic

No. It starts with an info dump of backstory and it doesn’t hook me. At this point, I have no idea who the children are or why I should care about them. I did turn the page, though, because I knew (where you did not until after you voted) that this book is from the author who wrote Practical Magic. I loved that movie and wanted to read the book. A friend had a copy of this prequel, so I thought I’d start with that and read Practical Magic if I enjoyed this one.

Hoffman does a great job of bringing the unusual Owens family to life and drawing the reader into the world of witches and curses. I’m glad I turned the page on this one.

Does this passage from The Rules of Magic intrigue you? Does it make you want to turn the page and continue reading? Will you run out now and buy the book? Borrow it?

I didn’t like the “Once upon a time” opening, but I would turn the page. Not sure how much farther I would have gone, but I would read more.

I actually liked the “Once upon a time” opening because it juxtaposed it immediately with some dark secret.

Once upon a time I opened a book to start reading then put it back on the shelf.

Sorry, nothing grabbed me at the start so on the shelf it goes.

I felt swamped with generations of people immediately, most of whom have thankfully disappeared – this sort of read is not for me

I feel sleepy reading this. No. Definitely back to the shelf. Thanks Val!