Jack Reacher caught the last of the summer sun in a small town on the coast of Maine, and then, like the birds in the sky above him, he began his long migration south. But not, he thought, straight down the coast. Not like the orioles and the buntings and the phoebes and the warblers and the ruby-throated hummingbirds. Instead he decided on a diagonal route, south and west, from the top right-hand corner of the country to the bottom left, maybe through Syracuse, and Cincinnati, and St. Louis, and Oklahoma City, and Albuquerque, and onward all the way to San Diego. Which for an army guy like Reacher was a little too full of Navy people, but which was otherwise a fine spot to start the winter.

It would be an epic road trip, and one he hadn’t made in years.

He was looking forward to it.

He didn’t get far.

He walked inland a mile or so and came to a country road and stuck out his thumb. He was a tall man, more than six feet five in his shoes, heavily built, all bone and muscle, not particularly good looking, …

Today’s book is Past Tense by Lee Child. 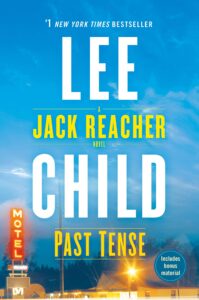 Past Tense by Lee Child

Jack Reacher hits the pavement and sticks out his thumb. He plans to follow the sun on an epic trip across America, from Maine to California. He doesn’t get far. On a country road deep in the New England woods, he sees a sign to a place he has never been: the town where his father was born. He thinks, What’s one extra day? He takes the detour.

At the same moment, in the same isolated area, a car breaks down. Two young Canadians had been on their way to New York City to sell a treasure. Now they’re stranded at a lonely motel in the middle of nowhere. The owners seem almost too friendly. It’s a strange place, but it’s all there is.

The next morning, in the city clerk’s office, Reacher asks about the old family home. He’s told no one named Reacher ever lived in town. He’s always known his father left and never returned, but now Reacher wonders, Was he ever there in the first place?

As Reacher explores his father’s life, and as the Canadians face lethal dangers, strands of different stories begin to merge. Then Reacher makes a shocking discovery: The present can be tough, but the past can be tense . . . and deadly.

Don’t miss a sneak peek of Lee Child’s novel Blue Moon in the back of the book.

Praise for Past Tense

“Child is one writer who should never be taken for granted.”—The New York Times Book Review

“[Lee Child] shows no signs of slowing down. . . . Reacher is a man for whom the phrase moral compass was invented: His code determines his direction. . . . You need Jack Reacher.”—The Atlantic

“Superb . . . Child neatly interweaves multiple narratives, ratchets up the suspense (the reveal of the motel plot is delicious), and delivers a powerful, satisfying denouement. Fans will enjoy learning more of this enduring character’s roots, and Child’s spare prose continues to set a very high bar.”—Publishers Weekly (boxed and starred review)

“Another first-class entry in a series that continues to set the gold standard for aspiring thriller authors.”—Booklist (starred review)

“With his usual flair for succinctness and eye for detail, Child creates another rollicking Reacher road trip that will please fans and newcomers alike.”—Library Journal (starred review)

Yes. The moment I hit the words “Jack Reacher” I’m in. That works for me because I’m a long-time Lee Child fan. I have a history with the stories, and trust Child’s writing and storytelling abilities.

Child’s prose doesn’t always follow the rules for what constitutes stellar prose, but he makes it work. It reflects Reacher’s character. It’s blunt and forceful.

See what he’s done with three lines near the bottom of the page? Each one is a one-sentence paragraph, and it’s a risk to use this technique unless you use it both sparingly and impactfully, which Child does:

“It would be an epic road trip, and one he hadn’t made in years.

“He was looking forward to it.

This type of format slows down the narrative and highlights whatever the author isolates. In this case, he’s saying a lot in three short sentences, but they’re important so he sets them apart–there’s even an extra blank line to signal a section end. The short passage contains a volume of information:

These three lines don’t appear during an action sequence, but within the narrative as part of the initial setup to the story. The passage raises questions in the reader’s mind and reflects the format of pretty much every story: the main character wants something; something else prevents him/her from getting it. Everything else revolves around the main character overcoming the obstacles to that desire.

I’d turn the page even if I wasn’t familiar with Jack Reacher simply to find out what happens to stop this “tall man, more than six feet five in his shoes, heavily built, all bone and muscle” from doing what he planned.

Child has written dozens of Reacher stories, and this one is one of his more recent ones. It’s actually a departure from what came before because he alternates between Reacher’s point of view (POV) and that of two Canadians. The reader understands these characters’ paths will cross, and as you read on, you’re quite anxious for that to happen.

I enjoyed the story and, as with other Reacher books, it was a quick read and highly suspenseful—even more suspenseful than normal, because of the couple’s ordeal before Reacher discovered them. I won’t give any spoilers, so if you’re curious, buy or borrow the book. But fair warning: it’s not your typical Reacher book.

What I’d come to expect from a Jack Reacher story was action, suspense, violence (I’m not a big fan of graphic/frequent violence, but yes, it’s part of the Reacher tradition), and, most of all, Reacher taking charge and kicking ass. The difference in this story is that Reacher has a smaller roll. You’d still consider him a main character, but the couple took a lot of the focus away from him.

It was still a good story—just not your typical Reacher book.

FYI, Lee Child has now apparently turned the story-telling reins over to his brother, Andrew Grant, who will take over as series author with coaching from Child. This bothers me, I have to admit, so I will no longer follow Reacher’s exploits. Perhaps I’ll sample one when I no longer feel, for want of a better term, as if my trust has been violated.

If you’re a Reacher fan, how do you feel about this situation? Have you read Past Tense? What did you think of it?

Does this passage from Past Tense intrigue you? Does it make you want to turn the page and continue reading? Will you run out now and buy the book? Borrow it?