While I won’t divulge the title or author until you’ve read the piece and voted, I will include the genre and any preliminary items (for example, quotes) you’d see when opening the book on your own.

Note: Today’s excerpt begins at the prologue rather than at Chapter One, so I’ve used the first page of the prologue.

We must be willing to get rid of the life we’ve planned, so as to have the life that is waiting for us – Joseph Campbell

FACT: All art, architecture, locations, science, and religious organizations in this novel are real.

As the ancient cogwheel train clawed its way up the dizzying incline, Edmond Kirsch surveyed the jagged mountaintop above him. In the distance, built into the face of a sheer cliff, the massive stone monastery seemed to hang in space, as if magically fused to the vertical precipice.

This timeless sanctuary in Catalonia, Spain, had endured the relentless pull of gravity for more than four centuries, never slipping from its original purpose: to insulate its occupants from the modern world.

Ironically, they will now be the first to learn the truth, Kirsch thought, wondering how they would react. Historically, the most dangerous men on earth were men of God … especially when their gods became threatened. And I am about to hurl a flaming spear into a hornets’ nest.

When the train reached the mountaintop, Kirsch saw a solitary figure waiting for him on the platform. The wizened skeleton of a man was draped in the traditional Catholic purple cassock and white rochet, with a zucchetto on his head. Kirsch recognized his host’s rawboned features from photos and felt an unexpected surge of adrenaline.

Valdespino is greeting me personally.

Bishop Antonio Valdespino was a formidable figure in Spain—not only a trusted friend and counselor to the king himself, but one of the country’s most vocal and influential advocates for the preservation of conservative Catholic values and traditional political standards.

“Edmond Kirsch, I assume?” the bishop intoned as Kirsch exited the train.

“Guilty as charged,” Kirsch said, smiling as he reached out to shake his host’s bony hand. “Bishop Valdespino, I want to thank you for arranging this meeting.”

“I appreciate your requesting it.” The bishop’s voice was stronger than Kirsch expected—clear and penetrating, like a bell. “It is not often we are consulted by men of science, especially one of your prominence. This way, please.” …

Would you turn the page? 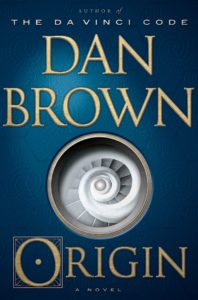 The #1 New York Times Bestseller (October 2017) from the author of The Da Vinci Code.

Robert Langdon, Harvard professor of symbology, arrives at the ultramodern Guggenheim Museum Bilbao to attend the unveiling of a discovery that “will change the face of science forever.” The evening’s host is Edmond Kirsch, a forty-year-old billionaire and futurist, and one of Langdon’s first students.

But the meticulously orchestrated evening suddenly erupts into chaos, and Kirsch’s precious discovery teeters on the brink of being lost forever. Facing an imminent threat, Langdon is forced to flee. With him is Ambra Vidal, the elegant museum director who worked with Kirsch. They travel to Barcelona on a perilous quest to locate a cryptic password that will unlock Kirsch’s secret.

Navigating the dark corridors of hidden history and extreme religion, Langdon and Vidal must evade an enemy whose all-knowing power seems to emanate from Spain’s Royal Palace. They uncover clues that ultimately bring them face-to-face with Kirsch’s shocking discovery…and the breathtaking truth that has long eluded us.

Yes. This first page contains a compelling hook and raises enough questions that, when I first read it, I had to find out what happened next. I’ve already read two other books by Dan Brown: The Da Vinci Code and Angels and Demons. By now I know what to expect from one of his stories. I know I’ll roll my eyes a few times at how contrived it all is, but I’m not reading it for the story. I’m reading it for the fascinating facts buried in the story. I often learn a lot from a Dan Brown novel.

That’s fortunate because I also often am frustrated by the obvious manipulations used to raise suspense, which don’t make the story suspenseful for me. It just makes me lose immersion because it reminds me I’m reading a story and the writer clearly wants me to be on the edge of my seat now. In more than one instance, he drags out the big reveal so long I’ve long since figured out what the secret is. The ending then becomes anti-climactic and more sedating than thrilling.

Basically, I read Brown’s books despite his writing style, not because of it. This isn’t to say others won’t find his stories compelling. It’s just that with his stories I’m always aware of the man behind the curtain and the hand up the puppet. I’ve never seen such transparent use of writers’ tools and tricks. When I can see the zipper on the monster’s back, it detracts from the suspension of disbelief part of the reading experience for me. But with Dan Brown’s novel’s, I can get past this because he offers me something else: the extra cool knowledge I take away at the end.

Next month I’ll discuss a book by another best-selling author whose most popular books I didn’t like. Thankfully, I gave this author another chance and read one of the lesser known books. And then I read others. One of those other books will be next month’s feature.

Does this passage from Origin intrigue you? Does it make you want to turn the page and continue reading? Will you run out now and buy the book? Borrow it?

I could tell by the style and subject matter that it was Dan Brown. But I was not hooked in the least. I’d need a few more pages and if I knew it was him I might persevere. But… Yawn

I stopped after the first paragraph. The writing is not very catching and the first sentence could have been a lot better. I didn’t feel hooked or compelled to move forward in the work at all.

As I was reading it, I thought it had the feel of a Dan Brown novel. I agree that his books’ value is in the interesting bits of art, history and science.

This definitely had the feel of a Dan Brown novel. I found the opening a bit dry, but I agree with Sandy, if I knew it was him, I would keep going.

I would borrow this book and read it. Dan Brown is not my favourite author in terms of style; however, I’m usually curious to see what he does with characters and materials. I find his books a good “beach” or “airport” or “snowy Sunday on the couch” read.

The first two paragraphs were slow, but the end of the first page caught my interest, so I would continue reading, at least for a short while.

I suspected it was Dan Brown but put that aside to read with an open mind. The first 1/3 caught my attention but most things to do with religion, and the notion of dispelling someone’s religion, don’t sit well with me so for that reason alone I wouldn’t willingly turn the page. I, too, have read Angels and Demons and Da Vinci Code and really liked them. This felt different.