To prohibit illicit carnal intercourse between Europeans and natives and other acts in relation thereto.

Be it enacted by the King’s Most Excellent Majesty, the Senate and the House of Assembly of the Union of South Africa, as follows:

The genius of apartheid was convincing people who were the overwhelming majority to turn on each other. Apart hate, is what it was. You separate people into groups and make them hate one another so you can run them all.

At the time, South Africans outnumbered white South Africans nearly five to one, yet we were divided into different tribes with different languages: Zulu, Xhosa, Tswanna, Sotho, Venda, Ndebele, Tsonga, Pedi, and more. Long before apartheid existed these tribal factions clashed and warred with one another. Then white rule used that animosity to divide and conquer. All nonwhites were systematically classified into various groups and subgroups. Then these groups were given differing levels of rights and privileges in order to keep them at odds.

Perhaps the starkest of these divisions was between South Africa’s two dominant groups, the Zulu and the Zhosa. The Zulu man is known as the warrior. He is proud. He puts his head down and fights. When the colonial armies invaded, the Zulu charged into battle with nothing but spears and shields against men with guns. The Zulu were slaughtered by the thousands, but they never stopped fighting. The Xhosa, on the other hand, pride themselves on being the thinkers. My mother is Xhosa. Nelson Mandela was Xhosa. The Xhosa waged a long war against the white man as well, but after experiencing the futility of battle against a better-armed foe, many Xhosa chiefs took a more nimble approach. “These white people are here whether we like it or not,” they said. “Let’s see what tools they possess that can be useful to us. Instead of being resistant to English, let’s learn English. We’ll understand what the white man is saying, and we can force him to negotiate with us.”

The Zulu went to war with the white man. The Xhosa played chess….

Today’s book is Born a Crime by Trevor Noah. 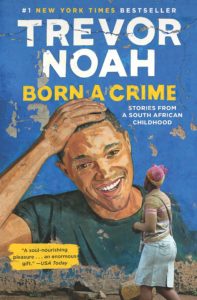 Born a Crime by Trevor Noah

#1 NEW YORK TIMES BESTSELLER • The compelling, inspiring, and comically sublime story of one man’s coming-of-age, set during the twilight of apartheid and the tumultuous days of freedom that followed

NAMED ONE OF THE BEST BOOKS OF THE YEAR BY Michiko Kakutani, New York Times • Newsday • Esquire • NPR • Booklist

Trevor Noah’s unlikely path from apartheid South Africa to the desk of The Daily Show began with a criminal act: his birth. Trevor was born to a white Swiss father and a black Xhosa mother at a time when such a union was punishable by five years in prison. Living proof of his parents’ indiscretion, Trevor was kept mostly indoors for the earliest years of his life, bound by the extreme and often absurd measures his mother took to hide him from a government that could, at any moment, steal him away. Finally liberated by the end of South Africa’s tyrannical white rule, Trevor and his mother set forth on a grand adventure, living openly and freely and embracing the opportunities won by a centuries-long struggle.

Born a Crime is the story of a mischievous young boy who grows into a restless young man as he struggles to find himself in a world where he was never supposed to exist. It is also the story of that young man’s relationship with his fearless, rebellious, and fervently religious mother—his teammate, a woman determined to save her son from the cycle of poverty, violence, and abuse that would ultimately threaten her own life.

The stories collected here are by turns hilarious, dramatic, and deeply affecting. Whether subsisting on caterpillars for dinner during hard times, being thrown from a moving car during an attempted kidnapping, or just trying to survive the life-and-death pitfalls of dating in high school, Trevor illuminates his curious world with an incisive wit and unflinching honesty. His stories weave together to form a moving and searingly funny portrait of a boy making his way through a damaged world in a dangerous time, armed only with a keen sense of humor and a mother’s unconventional, unconditional love.

Yes. The first page evaluation is always subjective, and opening with the definition of the 1927 Immorality Act was, in my opinion, a gamble, but a successful one. In my case, it made me realize how little history I know, especially about South Africa, and that I wanted to learn more.

Following the definition, I found the opening line of Noah’s memoir impactful. This first page sets the tone of the book and demonstrates the insightfulness viewers are used to getting when watching his Daily Show.

I’ve always been a fan of Noah’s because he’s able to intelligently argue a point, and when his memoir was selected for the book club to which I belong, I looked forward to reading it. If I’d hoped for something that would keep me laughing, though, that first page disabused me of the notion his life story would be comedic. While his style contains wit and humour, his life growing up in South Africa was no laughing matter.

Noah’s writing style hooked me from the start, and the last two sentences alone on that first page would’ve had me turning to the next one even if I weren’t obligated to keep reading for the sake of the book club.

Trevor Noah has led an interesting life. As he covered his younger years, I looked forward to learning how a young boy with so much against him could end up as a successful host of a satirical news program. His journey is both entertaining and astounding, and both he and his mother have earned my awe and respect.

Does this passage from Born a Crime intrigue you? Does it make you want to turn the page and continue reading? Will you run out now and buy the book? Borrow it?