“I honestly think if it hadn’t been that day it would have been another.” – Bob Jessop

Just before cottageland Ontario funnels into the sprawling stretch of concrete that makes up Toronto and its satellites, nature takes a last breath. That breath includes Queensville, one of a tiny strip of villages clinging to the northern rim of the city in a hopeless last stand against the spreading ooze of strip malls and subdivisions. A couple of dozen contracting kilometres of field and forest stand between the country and the four-lane expressways that make up the exoskeleton of Toronto.

The first sign of Queensville is its cemetery, located high—by Ontario standards—on a ridge. From a distance, the gravestones stretch as long and symmetrically as a white picket fence, conveying the impression of a substantial settlement. The impression is false. Queensville is little more than a dusty intersection whose main service to the region is as a final resting place. Until late 1984, few passing through had ever paid much attention to the village. Resignedly taking note of the dearth of antique stores or ice cream “shoppes” to break up the drive, the traveller considered the only issue of importance: Can I get through this backwater without shifting into third gear? Is there some red-faced York Regional cop lurking, engine running, in the lee of an old shed?

On the northern edge of the village, just past the cemetery, was the home of Alphonse and Ida Morin. They had bought the house in 1978, after the landlords of the much-adored, rambling home they rented in Toronto announced they were tearing it down. Perhaps in the long run it was fortuitous. Alphonse had grown weary of Toronto traffic, Toronto pavement and Toronto pretentions. He was so tired of the telephone ringing that he had it removed. Up here in the country, there were few disturbances. Alphonse and Ida’s six children could wander into cornfields …

Today’s book is Redrum the Innocent: From Wrongful Conviction to Stunning Exoneration by Kirk Makin. 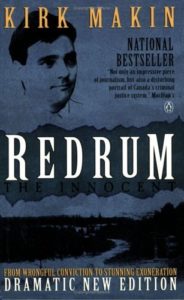 Redrum the Innocent by Kirk Makin

In 1992, after a stunningly-botched police investigation and two unusual trials, Guy Paul Morin was imprisoned for life for murder. Then, in 1995, Morin became the first convicted killer to be exonerated by DNA testing. Featuring an all-new epilogue with full post-trial updates on other suspects, this paperback edition of the classic crime case chronicles the complete bizarre saga, including juror comments after the verdict, and the successful effort to free Morin on bail.

The quote from Bob Jessop was a good hook, and since I knew about the case from personal connections to it, that alone would pull me in. The author sets the scene by describing the little town of Queensville and immediately introduces Guy Paul Morin’s parents, who become collateral damage in the murder investigation. For once, extended description drew me in rather than bored me. Kirk Makin sets the scene perfectly, showing the reader a peaceful town about to be shattered—innocence about to be despicably destroyed.

As a study of the Canadian justice system, Kirk Makin’s book was informative. It also revealed a lot I didn’t already know about the case. I couldn’t put it down, but, then, I also had personal reasons for wanting to read this book.

I remember Christine’s disappearance as if it were yesterday. My daughter was an infant, and I watched the search for Christine on the news, praying they’d find her safe, but terrified they wouldn’t as the days passed with no clues to her whereabouts. When they found her body, my heart broke for the little girl and for her family.

I met Christine’s mom, Janet, once at a bridal shower. My daughter was four at the time and attended the shower with me because she was to be the flower girl. Janet took me aside and told me what a lovely daughter I had. She advised me to take care of her and keep her safe. It was an emotion-filled moment and one I’ll never forget.

For those unfamiliar with the history, Guy Paul Morin was charged with raping and murdering his nine-year-old neighbour Christine Jessop. She vanished after school one day in October 1984. Her body was discovered three months later on New Year’s Eve.

The entire Greater Toronto Area (GTA) was in an uproar, naturally, and wanted the killer found and punished. Sadly, the police zeroed in on the wrong guy—Guy Paul Morin. What happened then was a long, drawn out travesty of justice, and if you ever feared wrongful conviction, this book is your nightmare come to life.

Makin takes the reader through as much as is known about Christine’s movements before her disappearance and what followed afterward, focusing first on the investigation into the disappearance, then the murder. The author delves into how the police came to train their efforts on Guy Paul Morin and what happened to Morin after that. Makin describes both trials, and includes interviews with jurors and details of Morin’s exoneration through DNA. Even with the DNA evidence, some didn’t want to let go of their belief that Morin was the killer.

At the time the book was written, no one else had been charged with the murder. It’s fascinating and well worth the read, especially since, finally, after thirty-six years, the police identified Christine’s killer as Calvin Hoover. When I read the book, it was with hindsight, knowing who really did it. I never saw Hoover’s name mentioned in the book at all even though the Jessop family knew him. Hoover’s wife worked with Christine’s father. It’s terrifying to think he never even blipped on their radar. The worst part of it all is that Hoover committed suicide in 2005. Christine’s family will never see him punished for what he did.

If you are interested in true crime, you’ll find this book well written and fascinating.

Does this passage from Redrum the Innocent intrigue you? Does it make you want to turn the page and continue reading? Will you run out now and buy the book? Borrow it?

I would turn the page. I was immediately captivated by the description of old Queensville, and I was intrigued because I live just north of Toronto – I like reading stories that take place in areas I’m somewhat familiar with. I don’t think I would be able to read the whole book, though, since true crime gives me the willies 😉