“That’s what you said about the brother.”

“The brother tested out impossible. For other reasons. Nothing to do with his ability.”

“Same with the sister. And there are doubts about him. He’s too malleable. Too willing to submerge himself in someone else’s will.”

“Not if the other person is his enemy.”

“So what do we do? Surround him with enemies all the time?”

“I thought you said you liked this kid.”

“If the buggers get him, they’ll make me look like his favorite uncle.”

“All right. We’re saving the world, after all. Take him.”

The monitor lady smiled very nicely and tousled his hair and said, “Andrew, I supposed by now you’re just absolutely sick of having that horrid monitor. Well, I have good news for you. That monitor is going to come out today. We’re going to take it right out, and it won’t hurt a bit.”

Ender nodded. It was a lie, of course, that it wouldn’t hurt a bit. But since adults always said it when it was going to hurt, he could count on that statement as an accurate prediction of the future. Sometimes, lies were more dependable than the truth.… 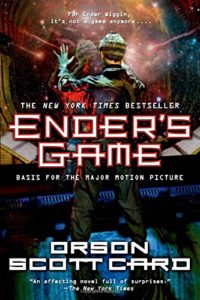 The worldwide bestseller, Ender’s Game by Orson Scott Card comes to the screen at last in a major motion picture event in November 2013. Starring Hugo’s Asa Butterfield, Harrison Ford, and Ben Kingsley, the movie is sure to inspire a new audience of fans to read the book that started it all.

Once again, Earth is under attack. An alien species is poised for a final assault. The survival of humanity depends on a military genius who can defeat the aliens. But who?

Ender Wiggin. Brilliant. Ruthless. Cunning. A tactical and strategic master. And a child.

Recruited for military training by the world government, Ender’s childhood ends the moment he enters his new home: Battle School. Among the elite recruits Ender proves himself to be a genius among geniuses. He excels in simulated war games. But is the pressure and loneliness taking its toll on Ender? Simulations are one thing. How will Ender perform in real combat conditions? After all, Battle School is just a game. Isn’t it?

Children of the Fleet

The Second Formic War (with Aaron Johnston)
The Swarm /The Hive

Yes, despite the rule-breaking Orson Scott Card does immediately.

The story opens with two big writing no-nos: dialogue before introducing a character and talking heads. The two speakers come across as disembodied voices, but Orson Scott Card uses this to great effect. The conversation provides information while raising questions that made me want to keep reading. Reread the passage and see how much we’re given about not just Ender and his family, but also about the speakers themselves.

I particularly liked that they mention the “buggers” without having any “as you know, Bob” moments explaining them. You want to know about the buggers? Keep reading. The term isn’t used here as British slang.

They reference some overdone tropes (the one; save the world) during the course of the conversation as well, but introduce doubt at the same time. As a reader, you assume Ender is “the one,” as one of the talking heads suspects, but there’s enough doubt cast you wonder if it’s possible he isn’t. Add to that our introduction to the main character as a child anticipating pain, and I couldn’t help but turn the page to see where this was all going. After that, I was more than hooked and read the book quickly.

The last sentence on that first page, which shows us a lot about Ender and what he’s already endured, clinched it for me: “Sometimes, lies were more dependable than the truth.”

It’s worth noting that the story opens from the adults’ perspective and then dives into the point of view of the child who will be the story’s protagonist. We are shown the adults are desperate, and as a result, control everything about the child’s life—and this child isn’t the first one they’ve subjected to their monitoring. The adults are bodiless voices without identity and not fixed in any physical location. Even the “monitor lady” isn’t named, nor do we know where she and Ender are. The first character whose identity we learn is Ender. The monitor lady calls him “Andrew” and the narrative refers to him as “Ender.”

Even if science fiction isn’t your go-to genre, it’s worth reading. I’ve always believed that a well-written story transcends genre, and this one falls into that category. I like science fiction, but not hard science fiction. This one told a riveting story. I look forward to reading more books in the series.

What do you think? Did the opening annoy you or suck you in?

Does this passage from Ender’s Game intrigue you? Does it make you want to turn the page and continue reading? Will you run out now and buy the book? Borrow it?

This really didn’t grab me at all. I found it confusing and poorly written. The only saving grace were the last few lines. So says a guy who is unlikely to ever see a Giller Prize or a movie contract.