It fell steadily on the city of Hypprux, a promise of the coming spring, but a cold, grudging one to be sure. The men who were repairing the roof of the cathedral had given up shortly after noon, and the shopkeepers had admitted defeat only a little while later, packing up their wares with numbed fingers, trudging into their homes soaked and shivering. The church bells had only recently rung nones, but the flickering glow of the rushlights and tallow dips was already seeping through the cracks of shuttered windows on this dark February day.

George Darci made his way along Domino Crossing. Wind now. The almost-sleet stung his eyes and he paused to wipe his face on his sleeve and pull his hood up a little further. He did not often visit Hypprux, and somehow, with the rain and the cold and the lack of people on the streets, he had become thoroughly lost. Standing in the porch of a small, run-down church, he peered up through the drops, searching for landmarks. Thomas had mentioned in his letter that there had been changes in the city, but surely something had to be familiar.

He made out the spires of the cathedral that poked up above the rooftops, and at last the towers of the Chateau. Wading through the river of mud and sewage that was now flowing down the street, he took the next turning, his steps confident, crossed a small market square that lay deserted in the wet, smiled when he at last found the Street of Saint Lazarus, broad and familiar, tripped over some scaffolding that was lying across the way, and went sprawling.

The cobblestones were hard, cold, and covered with muck; and as he lay, half-stunned, he was glad for the first …

Today’s book is Strands of Starlight by Gael Baudino. 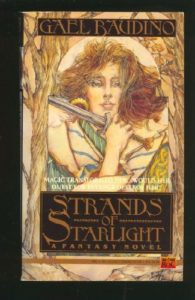 Strands of Starlight by Gael Baudino

Miriam is a frail young outcast whose healing powers have branded her a witch in the Inquisition of 14th-century Europe. Fleeing her city in search of the Free Towns and acceptance, she is brutally violated by a man she heals from the brink of death.

Saved by the intervention of the elves, Miriam swears to exact revenge on her assailant. But first she must learn the art of swordsmanship and train to be a warrior with her newfound powers of elfin sorcery.

When the Free Towns come under siege by the Inquisition — led by Miriam’s attacker — the safety and very existence of her people is threatened. Miriam knows her strength will be tested in a face-to-face confrontation with her enemy, but how can she battle for the freedom of others when her own revenge is a mere sword’s-length away …?

Yes. I like the writing style, and I was caught up in the prose and the atmosphere. I wanted to turn the page to find out why George Darci was glad even though he’d fallen in the mud.

The book is an older one—a version I saw on Amazon said it was out of print. A friend had lent me the copy I read. This friend lends me a lot of books, and if I don’t get into the story immediately, I don’t finish reading it. Even though it’s a thick book, I started reading it and kept right on going.

George Darci, as it turns out, isn’t the main character, which isn’t always the best way to open a story. The accepted advice says you should introduce your hero/heroine immediately so readers know who they’re following. Obviously, that doesn’t always make sense, and in this case, I understand why the author did it this way. In any case, it worked, and I enjoyed the story and appreciated the writing.

As a final note, I swear it’s a coincidence that both this month’s book and last month’s book started with spring-related rain. And so much for the “rule” that you shouldn’t open a book with the weather.

It was a dark and stormy night, y’all.

Does this passage from Strands of Starlight intrigue you? Does it make you want to turn the page and continue reading? Will you run out now and buy the book? Borrow it?