No one took any notice.

None of the merchants, moneylenders or friars strolling by in the twilight around San Francesco il Grande noticed the slovenly, ill-dressed man who hurried into the Franciscan church. It was the eve of a holiday, a market day, and the inhabitants of Milan were busy gathering provisions for the coming days of official mourning. Under such circumstances, it was only natural that the presence of yet another beggar left them unconcerned.

But the fools were once again mistaken. The beggar who entered San Francesco was not an ordinary man.

Without giving himself a moment’s respite, the ragged man left behind him the double row of benches that lined the nave and hurried on toward the main altar. There was not a soul to be seen inside the church. At last he had been permitted to see a painting, The Virgin of the Rocks, that few in Milan knew by its real name: the Maestà.

He approached the altar cautiously. His heart beat faster. There, utterly alone in the church, the pilgrim warily stretched out his hand, as if he might be forever united to the sacred scene. As he cast his eyes on the celebrated painting, suddenly a detail caught his attention. How strange! The pilgrim was overcome by a vertiginous feeling of horror. Someone had meddled with the Maestà.

The pilgrim did not dare move a muscle but remained frozen to the spot at the sound of the dry, deep voice behind him. He hadn’t …

Today’s book is The Secret Supper by Javier Sierra. 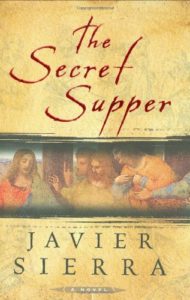 The Secret Supper by Javier Sierra

Milan, 1497: Leonardo is completing The Last Supper. Pope Alexander VI is determined to execute him after realizing that the painting contains clues to a baffling—and blasphemous—message that he is driven to decode. The Holy Grail and the Eucharistic Bread are missing, there is no meat on the table, and the apostles, shockingly, are portraits of well-known heretics—and none of them are depicted with halos. And why has the artist painted himself into the scene with his back turned toward Jesus? The clues to Leonardo’s greatest puzzle are right before your eyes…

Tightly paced and atmospheric, The Secret Supper is a dazzling historical thriller with a unique vision of both Leonardo da Vinci’s genius and his masterpiece—which you will never look at in the same way again.

Yes, because that first page has aroused enough curiosity in me to want to see what the voice behind him said and to see if I can get answers to the questions raised on that page. Having said that, for the first time since I started writing this blog, I haven’t finished reading a book I’m discussing here.

If you’re a writer, you might find yourself mentally rewriting some of those sentences in the above passage to make them more active. Also, this passage contains no chapter heading because it’s not a chapter. Chapter one follows this passage—eventually. I’ll get to that in a minute. But this passage isn’t labelled as anything—not as a chapter and not as a prologue. It’s just there. Is the reader supposed to assume it’s a prologue? Did the author/publisher leave off the prologue heading because they know readers often skip prologues, so they figured if they didn’t label it, readers would read it?

It’s not a good sign when your reading experience begins with questioning the absence of a chapter title, but that’s the power reader’s curse. It wouldn’t bump the average reader—they likely wouldn’t notice the lack, or if they do notice, they’d probably shrug it off.

In the book I’ve got, which is the hardcover, the next page gives you about another half a page or so of this prologue piece, and then the page after that contains an image headed “Architectural plan of the convent and church of Santa Maria delle Grazie in present-day Milan.” At the bottom of the image, the author tells you that “A cast of characters appears on pages 324 to 329.”

The page after that is a half-page preface. Then the page after the preface begins chapter one. That’s a lot of pages between the prologue and chapter one. It’s not necessarily a bad thing, but it made me stop and puzzle over it, which isn’t something you want your readers doing. The book is written in first-person POV, so that prologue doesn’t give you an accurate picture of the narrative style.

I picked this book up in the first place because my mother insisted I read it. Here’s how she recommended it to me: “This book was really boring. I want you to read it. Maybe you’ll like it so it won’t be a complete waste of my money.”

My mother and I don’t always agree on what makes a good book, but we agree more than we disagree, so I opened the book with some trepidation. Whether she’d prejudiced me or whether the writing style is simply not for me, I have so far only gotten to chapter six (page 30), and I started reading it a couple of months ago. I just don’t feel like picking it up again.

The blurb sounded great. It reminded me of The Da Vinci Code—which is another book where I’m not keen on the writing style. The difference, though, is that with The Da Vinci Code, the subject matter fascinated me and the story had enough action and intrigue to keep me turning pages. I’d hoped Sierra’s book would be the intellectual version of The Da Vinci Code, but perhaps it’s too intellectual. As with The Da Vinci Code, the subject matter fascinates me, but The Secret Supper lacks action-packed pacing that would keep me turning pages. I find the prose dry, and my mind wanders while I’m reading it. That, and my reluctance to take time out to read if that’s the book I’m going to pick up, indicates I’m not enjoying it.

If you get a chance to read it, let me know your feedback on it. I see by the reviews it has on Amazon and Goodreads that people out there love it. I’ll try to keep going. Maybe at some point, I’ll get drawn into it. I hate to leave a book unfinished.

Does this passage from The Secret Supper intrigue you? Does it make you want to turn the page and continue reading? Will you run out now and buy the book? Borrow it?

Another insightful Page Turner! Thanks for your consistently superb analysis, Val!