Today’s Member Spotlight features Val Tobin. Val knew she wanted to be an author for almost her whole life. 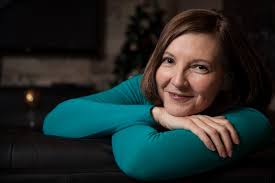 For her latest project, the research was fun. Val spent time in Niagara-on-the-Lake, exploring wineries and enjoying all that the Prince of Wales Hotel and the beautiful town has to offer.

I decided to become an author when I was around six. I’d read Harold and the Purple Crayon and loved it. I wanted to invent stories like that. 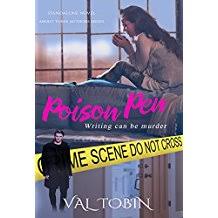 My most recent release is Poison Pen. It’s a stand-alone novel in the About Three Authors series of books created by Patti Roberts. Each story in the series centres around three authors and romance drives the plot.

I was invited by Patti to write an entry in the series. The story could be about any three authors at any point in their careers, and it didn’t have to relate to any of the other books already in the series. Since she promised me a free cover for my participation, I agreed.

The inspiration for the plot and the characters came from the prospect of how much fun it would be to write a story about murder within a group of authors. Naturally, professional jealousy had to factor into the motive. I also wanted the three main authors, which I immediately decided would be all female, to each have a struggle that would make them vulnerable.

Beth, a former model and successful author, has narcolepsy. Daphne, a not-so-successful author and sister to Leon (the murder victim) has OCD. Robin, an unpublished author who is about to have her career take off with help from Leon just as he turns up dead, has difficulty leaving the house. Each one must confront her greatest fears to help uncover the killer before he strikes again. Each one also finds love in unexpected places as she struggles to overcome her personal demons.

I set the story in Niagara-on-the-Lake, because that’s one of my favourite places in Ontario. Writing about a community of authors was fun. As a twist, I made the story a “howcatchem” rather than a “whodunit.” The reader is aware who the killer is, but the characters never know until it’s too late who among them is the fox in the henhouse.

How would you describe your creative process while writing this book? Was it stream-of-consciousness writing, or did you first write an outline?

I worked from an outline but it was flexible. The story grew from the outline, which I used as a guide rather than a bible.

Did your book require a lot of research?

It required a fair amount of research. I visited Niagara-on-the-Lake, hitting the wineries and staying at the Prince of Wales, which I mention in the book. I spent three glorious days there exploring the town. As well, I had to research police procedure, and I’m grateful for the help I received from York Region and Niagara Region police. Most of the police shows I watch are American, and I wanted to make sure that my story reflected Canadian police procedures. For example, in the US, you are allowed to have a lawyer in the room with you when police interrogate you. That’s not the case here in Canada. You may consult your lawyer, but he/she can’t be in the room with you, otherwise he/she would be considered a witness and would be unable to represent you.

Why do you write?

I write for the sheer joy of it, for the pleasure it brings me. If I’m going to spend a lot of time in my imagination anyway, I may as well write it down. Stories are like air for me. I’ve always had an active imagination. Writing provides me with a way to channel it.

While I write for myself, I publish to share my stories with others who might enjoy them. If it brings them some pleasure, it makes me happy and encourages me to continue to publish.

Tell us five random things about yourself.

I had a tiny part in a movie (Route of Acceptance) and a small part in another movie (I Met You First). My niece was the director for both, so I had connections.

For ten years, I worked in software and web development. I enjoyed coding, but hated the stress and, depending on the workplace, long hours. It left me no time for writing.

In 2008, I visited Hawaii twice to get my certifications as an Angel Therapy Practitioner® certified by Doreen Virtue. In 2010, I returned to take her courses in mediumship and spiritual writing. For a while, I did psychic readings using oracle cards.

I’m a certified Reiki Master/Teacher and have taught classes and attuned people to Reiki.

Do you write non-stop until you have a first draft, or do you edit as you move along?

I write non-stop until finished the first draft. Based on advice from Stephen King and various other authors I respect, I find that gagging my inner editor is the most practical way to get my first draft down. I do reread the section I wrote the previous day to orient myself at the start of a new writing session, and I will correct typos if I find them then, but I won’t do anything else with it.

The World of Publishing

Do you have another book in the works? Would you like to tell readers about your current or future projects? 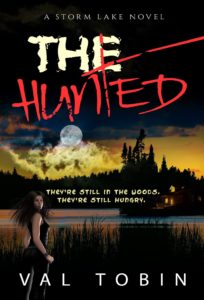 I’m currently working on a sequel to my short horror story Storm Lake. It was never supposed to go any further than what I had in the story, but as with some of my readers, I wondered about how the characters carried on after the events in the story. As ideas and scenarios flowed, and as the characters pestered me to pay attention to them, I decided to dive back into it.

The new story is called The Hunted and is a full-length novel. It picks up with Rachel, Jeff, and Peter twelve years after the events at Storm Lake. As adults who have adapted to the new normal where there are monsters in the world, they offer a more mature perspective on what happened and what to do about it. They’re better able to influence events rather than simply react to them.

I’m also working on a non-fiction book based on my master’s thesis on the after-effects of near-death experience. While we can’t prove that these experiences are real, studies have demonstrated that the impact of these experiences can be observed. My book will discuss how these experiences impact people’s lives and how everyone can benefit from what we’ve learned about them.

On Reading and Ideas

Where do you find ideas for stories?

Ideas come from everywhere. They usually evolve from daydreaming and wool-gathering moments that linger in my psyche until a story and characters form. For example, the idea for Storm Lake came about when I was eighteen and my parents bought a cottage out in the middle of nowhere. I noticed the trees had weird bulges on them.

They’re called burls and are a natural defect in a tree, but to me they looked like the tree was gestating an alien creature. I kept picturing creatures bursting from the trunks of the trees and ripping apart any people or animals they found. Twenty years later, the idea continued to needle me until I wrote the story.

The main characters in the story are two children, because children would be the most vulnerable in this type of situation. I wanted the girl to be the hero because not enough stories at the time had girls who kicked major butt. By the time I wrote the story, Alien had been released, and my main character, Rachel, is like a young Ripley—or what I’d imagine a young Ripley would be like if she’d had to deal with the alien when she was thirteen.

We’d like to thank Val for answering these questions and spotlighting her work. We look forward to reading Poison Pen and future endeavours.

If you’d like to be in the spotlight, please email me at lonicameron42@gmail.com

Newmarket, Ontario writer Val Tobin worked in the computer industry as a software/web developer for ten years while obtaining a masters degree in parapsychology, Reiki Master/Teacher certifications, and Angel Therapy® Practitioner certifications. Val is working on her eighth novel and her first non-fiction book.