After it’s over, of course, you want to kick yourself for all the things you didn’t see at the time. The Had-I-But-Known school of private investigation perhaps. My name is Kinsey Millhone and most of my reports begin the same way. I start by asserting who I am and what I do, as though by stating the same few basic facts I can make sense out of everything that comes afterward.

This is what’s true of me in brief. I’m female, age thirty-two, single, self-employed. I went through the police academy when I was twenty, joining Santa Teresa Police Department on graduation. I don’t even remember now how I pictured the job before I took it on. I must have had a vague, idealistic notion of law and order, the good guys versus the bad, with occasional court appearances in which I’d be asked to testify as to which was which. In my view, the bad guys would all go to jail, thus making it safe for the rest of us to carry on. After a while, I realized how naïve I was. I was frustrated at the restrictions and frustrated because back then, policewomen were viewed with a mixture of curiosity and scorn. I didn’t want to spend my days defending myself against “good-natured” insults, or having to prove how tough I was again and again. I wasn’t getting paid enough to deal with all that grief, so I got out.

For two years, I tried an assortment of occupations, but none had the same pull. Whatever else is true of police work, it does entail the intermittent sick thrill of life on the edge. I was hooked on the adrenal rush, and I couldn’t go back to the commonplace.

Eventually, I joined a small firm of private investigators …

Today’s book is B is for Burglar by Sue Grafton. 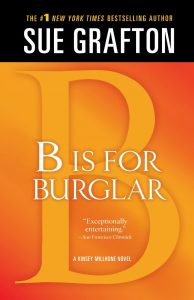 B is for Burglar by Sue Grafton

Beverly Danziger looked like an expensive, carefully wrapped package from a good but conservative shop. Only her compulsive chatter hinted at the nervousness beneath her cool surface. It was a nervousness out of all proportion to the problem she placed before Kinsey Millhone. There was an absent sister. A will to be settled–a matter of only a few thousand dollars. Mrs. Danziger did not look as if she needed a few thousand dollars. And she didn’t seem like someone longing for a family reunion.

Still, business was slow, and even a private investigator has bills to pay. Millhone took the job. It looked routine.

Elaine Boldt’s wrappings were a good deal flashier than her sister’s, but they signaled the same thing: The lady had money. A rich widow in her early forties, she owned a condo in Boca Raton and another in Santa Teresa. According to the manager of the California building, she was last seen draped in her $12,000 lynx coat heading for Boca Raton. According to the manager of the Florida building, she never got there. But someone else had and she was camping out illegally in Mrs. Boldt’s apartment. The job was beginning to seem a bit less routine.

It turned tricky when Beverly Danziger ordered Millhone to drop the case and it took on an ominous quality when Aubrey Danziger surfaced, making all kinds of wild accusations about his wife. But it only became sinister when Millhone learned that just days before Elaine Boldt went missing, her next-door neighbor and bridge partner had been murdered and the killer was still at large.

A house destroyed by arson. A brutally murdered a woman. A missing lynx coat. An apartment burgled of valueless papers, another ransacked in a melée of mindless destruction. And more murder. As Millhone digs deeper into the case, she finds herself in a nightmarish hall of mirrors in which reality is distorted by illusion and nothing–except danger–is quite what it seems.

To be clear, I turned the page but only because I’d already read Grafton’s first book in the series and enjoyed it. If I didn’t know anything about the author and only had that one page to go on, I’d pass on it, mostly because it’s a backstory info dump on the first page.

Nothing in that first page hooks me enough to want to read on. There’s a reason editors and agents warn writers not to insert backstory at the beginning and to start the story in media res (in the midst of things). Readers want to relate to and identify with the main character before they’re likely to want to hear about the character’s past. For a great post on this very subject, read Randy Ingermanson’s “How to Make Your Reader Care About Your Characters.”

What Grafton shares with us in that prologue should’ve been dished out as needed throughout the story, especially since readers already familiar with the character wouldn’t need the whole spiel. The blurb for the story intrigues me enough that it compels me to read beyond the first page. But without the blurb to prime my reading pump, I’d be bored before the end of the first page. To me, it’s like talking to someone at a cocktail party who drones on about themselves.

Was the story worth reading past the first page? Yes. I’m actually up to E is for Evidence in the series. The books are short, fast-paced reads, and I enjoy reading them. Grafton writes well-crafted crime stories and Kinsey Millhone is a likeable hero.

Does this passage from B is for Burglar intrigue you? Does it make you want to turn the page and continue reading? Will you run out now and buy the book? Borrow it?

Total info dump. It always boggles my mind when popular writers get away with this kind of stuff.

Popular writers get away with a lot because they sell a lot of books.

When I was studying editing way back in the dark ages in college, we were given a passage to read and review. The entire long paragraph was one sentence parsed with commas. I wanted to mark it all up. Then, after we all told the instructor what was wrong with it and why it had to change, he revealed the author was Margaret Atwood, and the passage was from one of her novels. He then asked us if that changed our minds about what we’d said and if we were editors, would we tell Margaret Atwood how to fix her award-winning prose.

I was only twenty-one and more OCD at the time, so yeah, I’d have called her on it. It’s a delicate position for an editor to be in though. Do you mess with commercial success for the sake of technical accuracy? I don’t think there’s a one-size-fits-all answer to that. I wish I could remember the passage and what book it came from. I’d love to reread it and see if I still feel the same way.

I don’t mind a bit of backstory. The “sick thrill of life on the edge” is what I want to read and I would keep going with this one. Thanks

There’s nothing in the first paragraph that grabs me. The whole passage, as Kim says, is an info dump. It’s a prologue, I get it, but most prologues are not the main character, but a sub to do just that, introduce us to something outside the main characters view point. It should prime us with action to pull us in. In my case, this is a swing and miss to get me as a new reader.

Prologue – really? Prologues are usually a blast from the past. Something that happened years, or decades ago that tie to the story. Occasionally they’re the ending and the story backtracks at chapter 1 with the book circling around to the prologue (not my fav.). This sounds more like an info dump. Give us that info as the story unwinds. Haven’t read Sue Grafton and probably never will.

Big name writers get away with a lot simply because they’ve sold lots of books. They shouldn’t be exempt from from writing dribble.

At that time, Sue Grafton was not a well known novelist, the first book in the series ‘A is for Alibi’ sold all of 6000 copies.

She was a fan of the hardboiled Detective genre, and many of those books started with this sort of prolog.

Being a fan of the genre, I would, and did, turn the page because I know the story begins on the next page.

This is the first ‘Page Turner’ I’ve read. Why did I wait so long to check out this feature?! Such a great learning opportunity. Can’t wait for the next one, Val.