“Run along, make your calls, and enjoy His Lordship’s hooley,” said Mrs. Maureen Kincaid, “Kinky” to her friends, as she knelt in the hall and sponged Ribena black-currant cordial from a small boy’s tweed overcoat. “I’ll expect you all back by five, sir, not a minute later. I’d not want the Christmas dinner to be spoiled.”

Her employer, Doctor Fingal Flahertie O’Reilly, said over his shoulder, “We’ll be on time, I promise, Kinky.” He strode off accompanied by his guest, Caitlin “Kitty” O’Hallorhan, and his young assistant, Doctor Barry Laverty.

Kinky shut the front door after them. She imagined that over the excited voices of the children she could hear footsteps crunching through the freshly fallen snow as Doctor O’Reilly led his little party to his big old Rover for the drive to Ballybucklebo House and the marquis’ 1964 Christmas Day open house.

It was warmer in the hall with the door shut. Just as well with a dozen chilled little carollers inside drinking hot black-current juice. She straightened up, inspected her handiwork, and smiled. “There you are, Dermot Fogarty. Good as new, so.”

“Thank youse, Mrs. Kincaid.” The eight-year-old bobbed his head. “If I’d got my new coat dirty, my daddy would’ve killed me, so he would.”

She tousled his hair. Not for the first time she thought how harsh to her ears the County Down accent sounded, especially when …

Today’s book is An Irish Country Girl by Patrick Taylor. 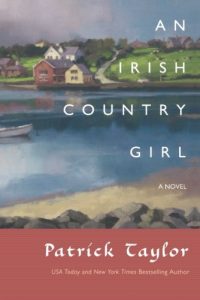 Readers of Patrick Taylor’s books know Mrs. Kinky Kincaid as the unflappable housekeeper who looks after two frequently frazzled doctors in the colourful Irish village of Ballybucklebo. She is a trusted fixture in the lives of those around her, and it often seems as though Kinky has always been there.

Nothing could be farther from the truth.

Some forty-odd years before and many miles to the south, the girl who would someday be Kinky Kincaid was Maureen O’Hanlon, a farmer’s daughter growing up in the emerald hills and glens of County Cork. A precocious girl on the cusp of womanhood, Maureen has a head full of dreams, a heart open to romance, and something more: a gift for seeing beyond the ordinary into the mystic realm of fairies, spirits, and even the dreaded Banshee, whose terrifying wail she first hears on a snowy night in 1922. . . .

As she grows into a young woman, Maureen finds herself torn between love and her fondest aspirations, for the future is a mystery even for one blessed with the sight. Encountering both joy and sorrow, Maureen at last finds herself on the road to Ballybucklebo—and the strong and compassionate woman she was always destined to become.

An Irish Country Girl is another captivating tale by Patrick Taylor, a true Irish storyteller.

Yes. I’d have to turn it to find out what comes after “especially when,” if for no other reason. But I have plenty of other reasons for wanting to turn the page.

Since the passage raises so many questions, I’d want to turn the page to at least read the next one. Add to that the charming literary style and the excellent facility the author seems to have with dialogue, and I expect to want to read the whole story.

Dialogue with accents and colloquialisms can be difficult to pull off, but Taylor manages to do it masterfully. I had to Google “hooley” to find out what it meant specifically, though, from context, I gathered it was some kind of social event. From Wiktionary: “Noun. hooley (plural hooleys) (Ireland and Scotland) A party; an evening of traditional music and dance. A strong wind or gale, as in blowing a hooley.”

Clearly, in this case, the first definition fits.

As it turns out, I did turn the page, and I wasn’t disappointed. This was a wonderful, charming story, and I enjoyed every word of it. I’d love to read more of Patrick Taylor’s books and found it interesting that this story was more of a prequel for the rest of the series.

Once NaNo is over, I’ll have to check out more of his books from the library. If you haven’t read it, I highly recommend it. Those interested in improving their dialogue when it uses dialect or colloquialisms might want to read this short article from MasterClass called “How to Write Character Accents: 5 Tips for Using Dialects in Writing.” Scroll down past the images of all the famous authors to see the full article.

Does this passage from An Irish Country Girl intrigue you? Does it make you want to turn the page and continue reading? Will you run out now and buy the book? Borrow it?

I never really like work that starts right away with dialogue, you don’t know anything about the person speaking so it starts with you thinking the wrong sex, type, voice, etc. And then the archaic way of tagging? Well, not a good start. It’s one of the things (out of many) that turned me off of the writing immediately.