While I won’t divulge the title or author until you’ve read the piece and voted, I will include the genre and any preliminary items (for example, quotes) you’d see when opening the book on your own.

Three Rings for the Elven-kings under the sky,

Seven for the Dwarf-Lords in their halls of stone,

One for the Dark Lord on his dark throne

In the Land of Mordor where the Shadows lie.

In the Land of Mordor where the Shadows lie.

When Mr. Bilbo Baggins of Bag End announced that he would shortly be celebrating his eleventy-first birthday with a party of special magnificence, there was much talk and excitement in Hobbiton.

Bilbo was very rich and very peculiar, and had been the wonder of the Shire for sixty years, ever since his remarkable disappearance and unexpected return. The riches he had brought back from his travels had now become a local legend, and it was popularly believed, whatever the old folk might say, that the Hill at Bag End was full of tunnels stuffed with treasure. And if that was not enough for fame, there was also his prolonged vigour to marvel at. Time wore on, but it seemed to have little effect on Mr. Baggins. At ninety he was much the same as at fifty. At ninety-nine they began to call him well-preserved; but unchanged would have been nearer the mark. There were some that shook their heads and thought this was too much of a good thing; it seemed unfair that anyone should possess (apparently) perpetual youth as well as (reputedly) inexhaustible wealth.

‘It will have to be paid for,’ they said. ‘It isn’t natural, and trouble will come of it!’

But so far trouble had not come; and as Mr. Baggins was generous with his money, most people were willing to forgive him his oddities and his good fortune. He remained on visiting terms with his relatives (except, of course, the Sackville-Bagginses), and he had many devoted admirers among the hobbits of poor and unimportant families. But he had no close friends, until some of his younger cousins began to grow up.

The eldest of these, and Bilbo’s favourite, was young Frodo Baggins. When Bilbo was ninety-nine he adopted Frodo as his heir, and brought him to live at Bag End; and the hopes of the Sackville-Bagginses were finally dashed. Bilbo and Frodo happened to have the same birthday, September 22nd. ‘You had better come and live here, Frodo my lad,’ said Bilbo one day; ‘and then we can celebrate our birthday-parties comfortably together.’ At that time Frodo was still in his tweens, as the hobbits called the irresponsible twenties between childhood and coming of age at thirty-three.

Twelve more years passed. Each year the Bagginses had given …

Would you continue reading?

Today’s book is The Lord of the Rings: The Fellowship of the Ring by J. R. R. Tolkien. 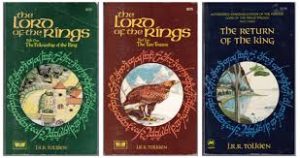 Sauron, the Dark Lord, has gathered to him all the Rings of Power – the means by which he intends to rule Middle-earth. All he lacks in his plans for dominion is the One Ring – the ring that rules them all – which has fallen into the hands of the hobbit, Bilbo Baggins.

In a sleepy village in the Shire, young Frodo Baggins finds himself faced with an immense task, as the Ring is entrusted to his care. He must leave his home and make a perilous journey across the realms of Middle-earth to the Crack of Doom, deep inside the territories of the Dark Lord. There he must destroy the Ring forever and foil the Dark Lord in his evil purpose.

Since it was first published in 1954, The Lord of the Rings has been a book people have treasured. Steeped in unrivalled magic and otherworldliness, its sweeping fantasy has touched the hearts of young and old alike.

Yes. I’ve turned this page to read the entire series at least a dozen times.

Before I say anything else, I should confess that the excerpt above isn’t technically the “first page.” There’s a Prologue in my edition, but it’s not part of the story, so I left it out. It’s a five-part narrative on various topics with headings such as “Concerning Hobbits” and “Of the Finding of the Ring.” Since it runs from page ten to page twenty-five, I decided not to include it even though it’s front matter you’d see if you picked up the book and flipped through it on your way to the first page. 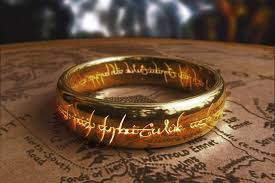 Now that that’s out of the way, let’s talk Tolkien – or, more specifically, A Fellowship of the Ring.

When I first read this book, I was fourteen, so keep in mind I’m drawing on my first raw, sight-unseen reaction to this story.

Tolkien had me at Three Rings for the Elven-kings under the sky – this rhyme sent shivers up my spine, particularly the part about the Dark Lord.

He creeped me out when Bilbo suggested his nephew Frodo come live with him (by fourteen I’d learned not to trust older men and their ulterior motives). When I read that part, I became uneasy. Nowadays, I’d say I was triggered. Even so, I turned the page and continued reading.

Here’s the interesting thing about first pages that I’m beginning to realize by doing this exercise: they don’t always provide an accurate depiction of what’s to come. I thought they did. I would have argued emphatically that I can tell from the first page if I’ll like the book or not.

I’d have been wrong.

The Lord of the Rings became my favourite book of all time. When I continued reading it, I couldn’t put it down and read all three books within a week. But, and you had to know there’d be a “but,” I set it down for months first after reading the first couple of pages in Chapter One. And this was after I’d read the entire Prologue, which I found kind of boring at the time but read anyway.

In those days, I believed Prologues were obligatory reading. I still read them, though I understand many agents, editors, and readers skip them. I always assumed – and still assume – that if the author includes a Prologue, it’s for a reason. So I read them. 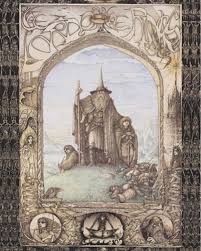 In this day of easy uploads and readers as gatekeepers, I no longer assume anything about any story, but in the 1970s, I knew I had to read the Prologue.

All of that is my way of saying that I set the book down after reading only a couple of pages, thinking that this book might not be for me. Sure, the world Tolkien had created intrigued me; and the rhyme about the rings chilled me, presaging a story of epic battles between good and evil, but the first couple of pages, in my opinion, rambled. At fourteen, I didn’t understand what an info dump was, but it felt like exactly that.

We get a huge dump on Bilbo’s life and relatives and neighbours. I set the book down after reading four pages, which ends with a discussion in the Green Dragon about Bilbo’s party.

I don’t know why I picked it up again, except that something drew me back. Perhaps I reread the ring rhyme. I know no one insisted I read it. My mother had ordered it from a mail-order book club, but she hadn’t said anything to me about the book. I’m not sure if she’d even read it by the time I picked it up.

When I returned to it, though, WHAM! I was hooked!

Since then, no matter how many books reviewers and marketers compare to The Lord of the Rings, I’ve never found one that comes close to the original. This book showed me what a true, gifted wordsmith can accomplish. The book is laden with description, but I revelled in it because it painted pictures with words.

If you’ve read my take on September 2018’s and October 2018’s book, then you know how I feel about description-heavy stories. But Tolkien opened my eyes to what a true master can truly accomplish.

When I was studying literature at the University of Waterloo, I naturally signed up for the Fantasy Literature course. Lord of the Rings was one of the books on the reading list, and I’d read it at least ten times by then. Decades later, I can still remember the following passage the professor read, which describes Lothlórien, because it moved me when I’d first read the book:

The others cast themselves down upon the fragrant grass, but Frodo stood awhile still lost in wonder. It seemed to him that he had stepped through a high window that looked on a vanished world. A light was upon it for which his language had no name. All that he saw was shapely, but the shapes seemed at once clear cut, as if they had been first conceived and drawn at the uncovering of his eyes, and ancient as if they had endured forever. He saw no colour but those he knew, gold and white and blue and green, but they were fresh and poignant, as if he had at that moment first perceived them and made for them names new and wonderful. In winter here no heart could mourn for summer or for spring. No blemish or sickness or deformity could be seen in anything that grew upon the earth. On the land of Lórien there was no stain. (p. 365)

I must stop here since this post is long enough, but I could go on and on about the marvels of Tolkien’s writing in The Lord of the Rings.

Next month, we’ll explore an author whose books I read in spite of his style.

Does this passage from The Fellowship of the Ring intrigue you? Does it make you want to turn the page and continue reading? Will you run out now and buy the book? Borrow it?