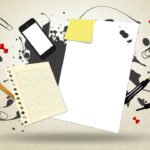 The most difficult part of telling a joke is realizing that it wasn’t as funny to your audience as it was to you. Why wasn’t it effective? Step aside from the assertion that you are “just bad at humor,” and take a look at some of the tips for writing comedy presented by Steve Shrott, a mystery and comedy writer. The secret to humor, he explained at a recent WCYR workshop, is to remember that humour is subjective. It depends on context, on timing, and on your audience. The good news? Humour can be taught.

Steve began with the story of how he became a comedian, and told an IKEA joke. (Always trust people who make IKEA jokes.) As a teacher, Steve encourages his students to write down every joke they come up with, even the bad ones, and write down everyone else’s jokes too, then, analyze them to learn how to recognize what’s funny and what’s not. All humour is based on the same basic principles of delivery, including three-jokes and call-backs. Three-jokes are made up of three statements, where the first two seem regular and the third is unexpected and strange. Call-backs are references to previous jokes or situations that would be understood by a specific audience aware of the context. Other techniques, such as exaggeration, misinterpretation, and incongruity, are what make jokes memorable. At their core, all jokes are based on an unexpected contrast between two or more elements.

Experimentation and confidence will help you find the form of humour that fits your audience and allows you to connect with them. Try it out next time you’re writing dialogue or describing a character. A good laugh goes a long way.