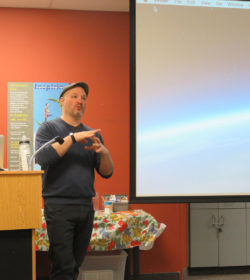 Many writers allow themselves to daydream about the idea of their novel being made into a movie, but often feel that it’s too lofty a goal for which to reach. 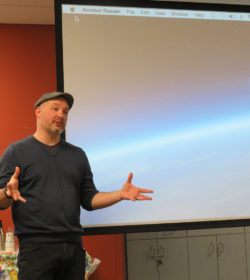 On Sunday February 11th, Canadian Movie Producer Sean Cisterna spoke to the WCYR about how to do just that…make the dream a reality.

His introductory talk focused on the difference between writing a novel and writing for the screen. The irony, in a way, is that you almost have to unlearn all the writing craft used in good storytelling in order to write a screenplay.

We looked at how screenwriters tweak architypes (not stereotypes) and utilize them, along with some salient “telling” to build a foundation in a director or producer’s mind.

It’s all about the hook and your target audience. 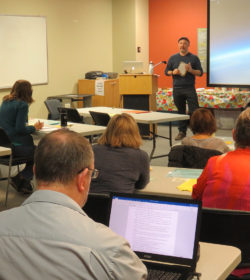 Sean walked us through samples of good screenwriting beginnings, and showed us what one page of a screenplay text looked like when visualized in a movie.

His list of dos and don’t to watch out for was relatively short, and he never once claimed screenwriting was for the faint of heart. Not only do you need to be passionate about the medium – make sure you study your genre and what other screenwriters have done before you – and be aware of the marketability of your product from line one. 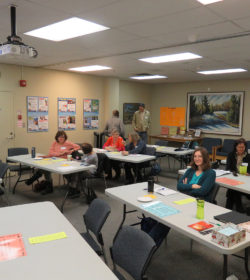 Sean shared with us several projects he’s taken from blog writings and books (both fiction and memoir) and revealed the process of converting a full-length novel into a clean, tight, screenplay. It was fascinating to learn about how a book is adapted for the screen and what goes on behind the scenes once a script is written.

Be sure to register for our next meeting: A Self-Publishing Success Story with Barbara Trendos – Sunday March 18th. Whether you’re interested in going the Indie route 100% or are considering a hybrid publication foundation, Barbara shares the ups and downs, pros and cons upfront so that you don’t have to discover them on your own.

Also, don’t miss our AGM and 1st ever WCYR Board of Directors election also on Sunday March 18th. The first hour of this gathering will be FREE to attend so that any and all members can hear about what the WCYR has been working on, where we’re headed in the near future, and participate in electing the officials who will take us there.

And spots are limited for the FREE Member-Run Workshop on Watt-Pad with Maaja Wentz coming up in April. Be sure to register sooner than later to reserve your spot. Learn about how to use Watt-Pad effectively and harness it as a part of your author platform

MJ Moores began her career as an English teacher in Ontario, Canada. Her love of storytelling and passion for writing has stayed with her since the age of nine. MJ relishes tales of adventure and journeys of self-realization. She enjoys writing in a variety of genres but speculative fiction remains her all time favourite. MJ runs the emerging writers’ website Infinite Pathways where she offers editing & publicity advice as well as platform building opportunities. Be sure to check out her sci/fi fantasy series, The Chronicles of Xannia. Connect with MJ at http://mjmoores.com or http://facebook.com/AuthorMJMoores