The patrol officers had left the front door open. They thought they were doing her a favor, airing the place out. But that was a violation of crime scene protocol regarding evidence containment. Bugs could go in and out. Touch DNA could be disturbed by a breeze through the house. Odors were particulate. Airing out a crime scene meant losing part of that crime scene.

But the patrol officers didn’t know all that. The report that Ballard had gotten from the watch lieutenant was that the body was two to three days old in a closed house with the air-conditioning off. In his words, the place was as ripe as a bag of skunks.

There were two black-and-whites parked along the curb in front of Ballard. Three blue suits were standing between them, waiting for her. Ballard didn’t really expect them to have stayed inside with the body.

Up above, an airship circled at three hundred feet, holding its beam on the street. It looked like a leash of light tethering the circling craft, keeping it from flying away.

Ballard killed the engine but sat in her city ride for a moment. She had parked in front of the gap between two houses and could look out at the lights of the city spreading in a vast carpet … 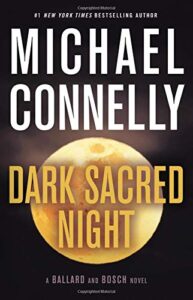 Harry Bosch teams up with LAPD Detective Renée Ballard to face the unsolved murder of a runaway, and the fight to bring a killer to justice.

Detective Renée Ballard is working the night beat — known in LAPD slang as “the late show” — and returns to Hollywood Station in the early hours to find a stranger rifling through old file cabinets. The intruder is retired detective Harry Bosch, working a cold case that has gotten under his skin.

Ballard can’t let him go through department records, but when he leaves, she looks into the case herself and feels a deep tug of empathy and anger. She has never been the kind of cop who leaves the job behind at the end of her shift — and she wants in.

The murder, unsolved, was of fifteen-year-old Daisy Clayton, a runaway on the streets of Hollywood who was brutally killed, her body left in a dumpster like so much trash. Now Ballard joins forces with Bosch to find out what happened to Daisy, and to finally bring her killer to justice. Along the way, the two detectives forge a fragile trust, but this new partnership is put to the test when the case takes an unexpected and dangerous turn.

Dark Sacred Night for the first time brings together these two powerhouse detectives in a riveting story that unfolds with furious momentum. And it shows once more why “there’s no doubt Connelly is a master of crime fiction” (Associated Press).

Connelly makes every word count in this brief excerpt, and he puts the reader into the scene with Detective Ballard. We’re given a wealth of information and enough description to want to hold our noses before she steps inside the house.

He raises questions, too, that make me want to find out what happened and why. Who is dead? How? Was it murder? Why wasn’t the body discovered for days?

I’ve always enjoyed Connelly’s writing style, and thoroughly enjoyed this book, which I read in less time than it took them to discover that body.

Does this passage from Dark Sacred Night intrigue you? Does it make you want to turn the page and continue reading? Will you run out now and buy the book? Borrow it?