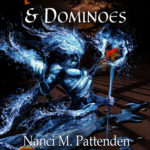 The wonder twins Dodge and Yoli are, unfortunately, the D.E.M.ON. agency’s only hope for discovering the source of a Yeti-iceman’s rampages at a ski resort north of the city. They can’t keep him in permanent puddle-stasis or something else just might blow up in their faces. With the best of the best grappling with portal rifts and a mounting death toll, the young partners need to set their differences aside to handle inter-species and inter-agency diplomacy… neither of which is all it’s cracked up to be. When cold clues heat up on this frigid mission, rules might not be the only things broken when Yoli falls prey to the iceman’s “pet.”

Can the “B” team discover the source of blizzard-man’s terror before Blue Mountain avalanches into a deep freeze?

Dive into the sixth installment of D.E.M.ON. Tales, where Men in Black meets Supernatural in a tongue-in-cheek blend of action and humour.

A bit about MJ and Nanci:

Nanci Pattenden and MJ Moores have been writing critique partner for almost ten years. The two women began writing very different genres: Nanci historical mystery and MJ sci-fi/fantasy. However, over the years they have rubbed off on each other. Nanci now dabbles in urban fantasy, and MJ has fallen for the Victorian era writing YA steampunk. They have now teamed up to write a tongue-in-cheek local urban fantasy novella series called D.E.M.ON. Tales. Nanci and MJ are active volunteers for the Writers’ Community of York Region and, when permitted out in public, enjoy attending book events to ply their wares.

Find them both at hammeredwords.weebly.com

Thanks so much for sharing the love <3