Some people used to believe that there was an elephant graveyard—a place that sick and old elephants would travel to to die. They’d slip away from their herds and would lumber across the dusty landscape, like the titans we read about in seventh grade in Greek mythology. Legend said the spot was in Saudi Arabia; that it was the source of a supernatural force; that it contained a book of spells to bring about world peace.

Explorers who went in search of the graveyard would follow dying elephants for weeks, only to realize they’d been led in circles. Some of these voyagers disappeared completely. Some could not remember what they had seen, and not a single explorer who claimed to have found the graveyard could ever locate it again.

Here’s why: The elephant graveyard is a myth.

True, researchers have found groups of elephants that died in the same vicinity, many over a short period of time. My mother, Alice, would have said there’s a perfectly logical reason for a mass burial site: a group of elephants who died all at once due to lack of food or water; a slaughter by ivory hunters. It’s even possible that the strong winds in Africa could blow a scattering of bones into a concentrated pile. Jenna, she would have told me, there’s an explanation for everything you see.

There is plenty of information about elephants and death that is not fable but instead cold, hard science. My mother would have been … 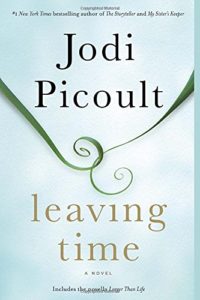 Alice Metcalf was a devoted mother, loving wife and accomplished scientist who studied grief among elephants. Yet it’s been a decade since she disappeared under mysterious circumstances, leaving behind her small daughter, husband, and the animals to which she devoted her life. All signs point to abandonment … or worse. Still Jenna–now thirteen years old and truly orphaned by a father maddened by grief–steadfastly refuses to believe in her mother’s desertion. So she decides to approach the two people who might still be able to help her find Alice: a disgraced psychic named Serenity Jones, and Virgil Stanhope, the cynical detective who first investigated her mother’s disappearance and the strange, possibly linked death of one of her mother’s co-workers. Together these three lonely souls will discover truths destined to forever change their lives. Deeply moving and suspenseful, Jodi Picoult’s first novel with Random House Canada is a radiant exploration of the enduring love between mothers and daughters.

Yes. Even without knowing Jodi Picoult, one of my favourite authors, wrote this, I’d turn the page. The discussion about the elephant graveyard captured my imagination and caught my attention. The juxtaposition of myth versus fact intrigued me.

This book was one of the selections for the book club to which I belong. I had to brace myself, of course, when I picked it up. If you’ve read any books by Jodi Picoult, you know you’re in for an emotional thrashing. After reading one of her books, your empathy levels will crash through the roof.

Her books are emotionally difficult to read because she’s such a gifted writer you suffer along with the characters. There’s always a twist at the end, and this one certainly followed the trend.

My one complaint was that I didn’t find it as credible as her other books, because some of the logic of the paranormal situations didn’t track for me. I had to consciously work through the logic within the story world to accept events as plausible the way she wrote them. But that was easy enough to do since the storytelling is exceptional.

It’s well worth the read as long as you can psych yourself up for the inevitable emotional wrenching you’ll suffer.

Does this passage from Leaving Time intrigue you? Does it make you want to turn the page and continue reading? Will you run out now and buy the book? Borrow it?

Probably not. Not unless I’d heard from someone that the book is really good. The talk of magic is too mundane and not mysterious or weird enough to grab my interest. It only signals that this is a genre I don’t like.

Now, knowing what the book is and who the author is, I would persevere a chapter or two. I did like the main character’s name, and the hint of a strained relationship with her mother.

Your reaction demonstrates how critical it is for authors to get a large, dedicated fan base. When readers fall in love with a certain author, they’re more likely to give that writer’s new story a chance even if the story doesn’t at first glance appeal to them.

It started to interest me, even with the modifications of present tense words to past tense, but it dragged in the second paragraph. I like something that grabs me and says, “You must keep reading!” And this did not do it.

I instantly loved the idea of the graveyard – and then suddenly, this idea is dashed to pieces by saying it doesn’t exist. Yikes!! I don’t like having things snatched away like that. Then my hopes were slightly raised again but my faith was gone.